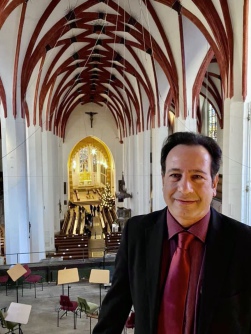 He studied organ with Luigi Celeghin, attending the master classes held in Lanciano by the same teacher. At the same time he took some courses in Musicology at the Institute of Paleography and Musical Philology at the University of Pavia, Cremona.

During this period, deepening in the various Lombard organ schools about the construction techniques of the instrument, he opened in Cremona in 1993 his own Bottega Organaria, for the construction, restoration and maintenance of pipe organs. From 1994 to 1996, he was a technical tuner for the firm «Cav. Giuseppe Ruffatti», in Albignasego, Padua, collaborating with the installation of numerous instruments.

In 1997 he moved to Calabria, in Sant’Onofrio (Vibo Valentia), where he stabilized his artisan headquarters, becoming a trusted firm of the Superintendence of Calabria for the restoration of historical organs.

In 2004, on the occasion of the ten years of activity, the Bottega Organaria Pronestì builds and installs in his private house a grandiose organ of 36 stops divided into four sound divisions commanded by a valuable carved console. Since the day of the inauguration there are regular concerts held on this instrument by prestigious organists and instrumentalists of great fame.

A rich collection of keyboard instruments, including fine harpsichords and positivo organs, also completes the best equipment for the execution of ancient music.

Finally, in 2006, for the merits acquired and the results achieved, given the production and quality of the manufactured products, the Regional Council of Calabria assigns to the instruments of the Bottega Organaria the Mark of Origin and Quality, inserting the same company in the Special Register of Enterprises of Artisan Excellence of the Calabria Region.

In 2007, finally, the same Regional Authority confers to the M. Salvatore Pronestì the title of Master Craftsman, with the faculty to start and train in their workshops the apprentices organbuilder.

Many works have been carried out: new organs made according to traditional methods and settings up to the installation of instruments through modern techniques, scrupulous and careful restoration of ancient organs, continuous and programmed service of assistance and maintenance to innumerable instruments on the national territory.

He is often invited to several prestigious conferences as an expert speaker in Organology and construction methods of Italian tradition.

To his credit numerous masters and meetings, often addressed to students of the organ school classes and focused on the theoretical and practical knowledge of organ building, with direct experiences within their own workshop.

For the experience gained in the field and the deep structural knowledge of the instrument is called, as a careful tester, to the drafting of expert reports and proceedings on organs and work submitted for examination.

Alongside the artisan musical work an intense concert activity, often inaugurating their own instruments, new or restored.

As organist he is particularly appreciated in improvisations in different styles, as well as in the unpublished transcriptions and elaborations for organ of symphonic marches of band tradition, opera pieces, soundtracks and popular themes.

In September 2018, on the occasion of the 25th year of concert activity, he was called to give an important recital in the prestigious Nikolaikirche in Leipzig, performing Improvisations on themes by J.S.Bach. He was then again invited, in the same Nikolaikirche, as part of the Orgel Herbst 2020 Festival, for the performance of the 250th anniversary concert "Hommage à Ludwig van Beethoven", with works, transcriptions and improvisations.

In October 2018 he is Visiting Professor at UFPR, Federal University of Paranà, Brazil, for the class of Basso Continuo and Improvisation, with a monographic course on traditional Italian Organaria.

In January 2020, crowning the entire organ path, he was invited to the famous Thomaskirche in Leipzig, the center of Bach culture where, with two consecutive concerts included in Orgelvesper, he opens -as the first soloist organist 2020- the series of Motettes, Musik in Bachs Kirche.

In Italy it is always present in concerts and events at every level, host of shows and organizations among the most renowned in the musical, organ and organological culture, such as:

He has given concerts in important national and international festivals, including:

Already Maestro di Cappella of Vibo Valentia Cathedral, he was later nominated to fill the post of Titular Organist in the Cathedral of his diocese, Mileto-Nicotera-Tropea.