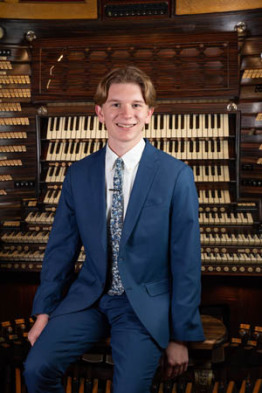 Brett Miller was the youngest of the three finalists in the American Theatre Organ Society’s Young Organist Competition last June.  He has attended and performed organ concerts and silent films for the past five years around the Pennsylvania, New Jersey, and New York area as well as Chicago and Boston. He recently played for the 35 mm Film Fest Awards Program honoring Library of Congress and their work.  Along with his brother he founded “musicalpromise.org” a musical initiative to help fund the Juvenile Diabetes Research Foundation.

Brett and his brother received the White House Student Film Festival honorable mention for a film featuring this community service work.  Brett was also the recipient of the Kohl’s Care, Prudential Spirit of Community Awards as well as the Music and Spirit award for his high school and marching band.  He is a member of the Philadelphia Youth Orchestra Organization where he received an award this past May for his performance of the “Leroy Anderson piano concerto”.  He also performs in his high school band and jazz ensemble where he was recognized at the Cavalcade Champions as a superior soloist.  He has been featured as a pianist at the Pennsylvania District Orchestra and last October at the New York All State Band and Orchestra ensemble.

Aside from music, he enjoys travelling, biking, skiing, and spending time with family and friends.  He studies with Jelani Eddington and has played as a featured organist at his church in Bucks County Pennsylvania, Rahway, The Colonial, Union County Performing Arts, Lowe’s Jersey Theater in Jersey City, the Brooks Performing Arts Center and the Trenton War Memorial. This past fall he opened for the sold-out appearance of George R.R. Martin, author of the “Game of Thrones” and on New Year’s Eve was featured on the Möller with the Capital Philharmonic at the Trenton War Memorial.  He is thrilled to be performing at Boardwalk Hall!