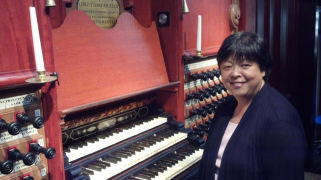 Cheryl Van Ornam is the organist at First Baptist Church in Richmond, Virginia.  She is also a private piano teacher. She has given recitals in Los Angeles at First Congregational Church and the Cathedral of Our Lady of the Angels; Busch Hall and King’s Chapel in Boston; Northwestern University’s Alice Millar Chapel. Recitals in Virginia include Richmond’s Historic St. John’s Episcopal Church (where Patrick Henry gave his famous quote, “…give me liberty or give me death!”); and, Bruton Parish Church in Colonial Williamsburg.  For seven years, she organized a three-hour “Bach Marathon” in Richmond, Virginia with the Richmond Chapter of the American Guild of Organists. She has participated in two “Organ Spectacular” concerts, one in Chicago and one in Richmond; and, participated in the 40th annual Bach Marathon at Chevy Chase Presbyterian Church in Chevy Chase, Maryland. She has made a CD with Tracey Welborn, tenor, and William Balz, pianist. Pipedreams Program No.1752 included “Balboa Bolero” by Joe Utterback performed with with Elizabeth Melcher Davis at Grace and Holy Trinity Episcopal Church in Richmond.  Further study has been at Smarano Organ Academy, Leipzig Organ Academy, Haarlem Summer Organ Academy, and McGill Summer Organ Academy.  She has been active with the American Guild of Organists in Chicago, Boston and Richmond, where she was the Dean. Cheryl and her husband are new grandparents!