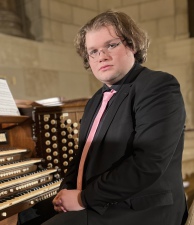 Dylan David Shaw, a native of Philadelphia, has been enraptured with the pipe organ from a very young age. He began lessons on the piano at age five and then organ at age eleven. Shaw frequented the Grand Court at Macy’s to hear the evening concerts. Through these regular visits he became well acquainted with Wanamaker Grand Court Organist Peter Richard Conte and the late Michael Stairs, former organist of The Philadelphia Orchestra.

Dylan continued organ studies with and served as a console assistant for Michael Stairs. Dylan is currently assistant organist for Peter Richard Conte at the Wanamaker Grand Court Organ at Macy’s Center City, where he performs several concerts each week, with programs that range from the works of Bach to the occasional Disney tune. Dylan is also a Wyncote Foundation Grant Restoration Associate. In addition to his duties in the Wanamaker Organ Shop and the Grand Court, Dylan also performs solo recitals and is a frequent church substitute throughout the Philadelphia area. He has been featured in recitals for the Acme Organ Institute’s Oktoberfest in Indiana, as well as YouTube videos for the institute. Dylan currently serves as a member of the Executive Committee of the Philadelphia Chapter of the American Guild of Organists. As a primary core of his repertoire, Dylan focuses his efforts on transcribing and performing orchestral literature, including Mussorgsky’s Night on the Bald Mountain, Paul Dukas’ The Sorcerer’s Apprentice. Shaw is a great fan of Sir Arthur Sullivan and has created numerous transcriptions, including the overture to HMS Pinafore and the charming and popular Overture di Ballo.