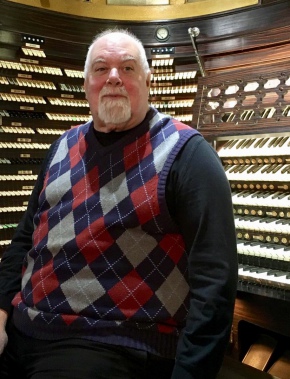 John Bate is the Organist and Choir Director at St. Peter's United Methodist Church in Ocean City, NJ and Conductor of the Masterworks Choir of Ocean City. At the church he directs a semiprofessional choir of 30 singers ranging in age from 15 to 90, and is the principal organist. Besides singing every Sunday of the church year the choir has presented major choral works and has been on tour to New York and Florida, and has commissioned several choral works over the years.  He has overseen the complete rebuilding of the churches 54 rank Moeller organ by the R. J. Brunner company. The latest work included the installation of a Festival Trumpet-en-Chemade.

Before coming to Ocean City he was the Organist and Choirmaster at Grace Episcopal Church in Nyack, NY and also studied organ with McNeil Robinson. He has played recitals in New York, Philadelphia, Pa, Atlanta Georgia and Bradenton Florida, and now Atlantic City.

The Masterworks Choir is a volunteer choir of 50 singers and they present two concerts each year of major oratorios with orchestra accompaniment. The choir was started by a group of people from the Ocean City Arts Center to present Handel's "Messiah" each year in Ocean City. They will celebrate their 50th Anniversary in the fall of 2020. Messiah is performed by the choir every 5 years as a tribute to our founders.

John holds a Bachelor's and Master's Degrees from Westminster Choir College where he studied organ with George Markey and Eugene Roan, and choral conducting with Joseph Flummerfelt.  John and his partner Chris live in Atlantic City.