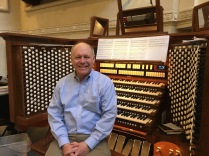 Born in England in 1957, John S. Dixon moved to Virginia in 1988, and ten years later became organist at Providence Presbyterian Church in Virginia Beach, the church he still serves today.
His high school in Southend-on-Sea, Essex - close to the estuary of the River Thames - is home to a fine pipe organ, and has inspired many students to become organists. Christopher Weaver was his organ teacher in his teenage years in England. In America, he studied with Peggy Kelley Reinburg, W. Allen Shaffer and Kevin Kwan prior to earning the Colleague certificate of the American Guild of Organists.

His catalog of compositions, now exceeding 800 works, includes hundreds of pieces for organ. Many are published and may be heard on YouTube, performed by numerous artists. He shares his music widely around the world, and delights in learning where it is being used: for example, his Hornpipe in D has been heard in both Perth, Scotland and Perth, Australia.

Between his 60th and 70th birthdays, he hopes to share his music in person in all 50 states and Washington DC.

When not writing or performing his music, John serves as executive director of The Academy of Music, a non-profit community music school headquartered in Norfolk, Virginia.