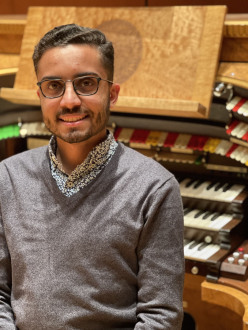 Luke Staisiunas currently serves as Secretary to the board and Chair of the Young Theatre Organist’s Competition  for the American Theatre Organ Society. Winner of the 2018 ATOS competition, and having performed from coast to coast,  he is comfortable at theatre and concert instruments alike.

He has recently returned to the East Coast, having earned his Master’s Degree in Organ Performance under Dr. Adam Pajan and Dr. Damin Spritzer. He also earned his Bachelor’s from OU under Dr. John Schwandt and Dr. Pajan. During his time at OU, he performed with the Symphony Band, OU Chorale, OU Percussion Ensemble, as well as playing continuo for the Vitam Musica Foundation’s orchestra. In addition, he is active as a transcriber of orchestral works for organ, as well as compiling scores for silent film accompaniment.

As a technician, he has most recently worked for the Red River Pipe Organ Company and the former American Organ Institute shop, in Norman Oklahoma. During his time at the Red River firm, he was active as both a shop and field technician. During his time at the AOI, he oversaw the design and installation of a control system for the Schlicker studio organ as part of his Organ Technology coursework.

He is quite versatile as a church musician, equally at home with traditional liturgy and more contemporary styles of worship. Most recently serving First Baptist Church of Norman OK from 2019-2021, where he played the organ with the orchestra and band, in addition to organ solos and traditional hymnody. He is also an experienced substitute, serving a variety of denominations.