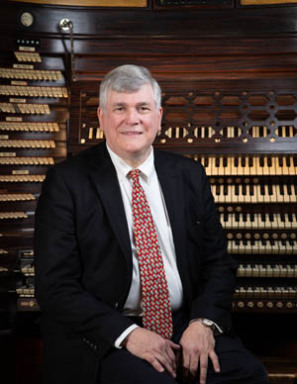 Marc F. Cheban has served as Director of Music for St. Thomas's Episcopal Parish in Newark, DE since 2004.  Before that he was Organist/Choirmaster of St. Andrew’s School in Middletown, Delaware for 30 years.  Among his many duties, he formed and directed a select ensemble of about 16-18 singers chosen by audition.  The Concert Choir made numerous concert tours of Western Europe, appeared several times at the White House, and issued many recordings.

While in college Marc was an active "Theatre Organist," playing every Friday evening at the historic Lansdowne Theatre, just outside Philadelphia.  He has performed many times on the well-known John Dickinson Theatre Organ in Wilmington.

He is known for his accompaniments to major silent films, having played for numerous films over the years all over the Delaware Valley.

Marc has appeared countless times as a recitalist.  His programs are marked by a delightful combination of serious organ works, orchestral transcriptions, and colorful novelty works.  Since 1981 he has been a regular recitalist (especially during the Christmas season) on the renowned Ballroom Organ at Longwood Gardens, Kennett Square, PA , and has been fortunate to play informally many of the great cathedral organs of England and France.