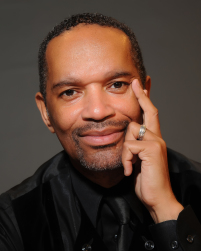 Native Philadelphian, Marvin Mills, is organist at St. Paul’s United Methodist Church in Kensington, Maryland. He is also music director of the acclaimed National Spiritual Ensemble and guest artist with the Ritz Chamber Players, based in Jacksonville, Florida. Previous positions include Associate Minister of Music at National City Christian Church, Director of Music at All Souls Church, Unitarian, and University Organist at Howard University, all in Washington, DC.

Mr. Mills has performed for numerous chapters of The American Guild of Organists, was a featured recitalist in the Guild’s 1992 National, 1996 Centennial National conventions, and appeared at its 2010 Convention in Washington, DC. He opened the 1989 Wendell P. Whalum Concert Series at Morehouse College, performing for the entire student body. Presented in recital by the Washington National Cathedral in observance of Black History Month 1989, he was invited back for its 1995 and 2002 Summer Festival Series.

For over a decade, Mr. Mills has been a featured artist at the Shenandoah Valley Bach Festival as recitalist, chamber musician and choral conductor - preparing the Festival Chorus for major works such as: Haydn’s Creation, the Requiems of Mozart, Brahms and Verdi, Beethoven’s Symphony No. 9, and Handel’s Samson. A prize-winning composer, his Four Spirituals for Denyce Graves have been performed throughout the country at colleges and universities by aspiring singers.  A setting of a Phyllis Wheatley poem, On Virtue, was commissioned by the Cathedral of St. John the Divine for its Poets Corner. He made his theatrical conducting debut with the Washington Savoyards in its production of Scott Joplin’s Treemonisha in 2010 and is a vocal coach/staff pianist at Morgan State University.