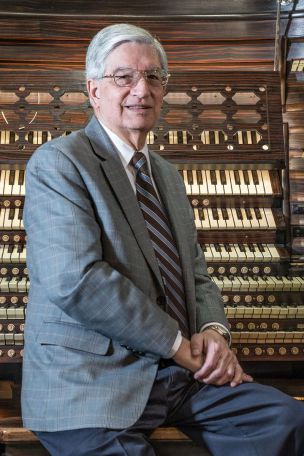 Rudy Lucente is an assistant organist at the Grand Court Organ in Macy’s, Philadelphia (formerly Wanamaker’s). An internationally-known recitalist, he has also been a church musician for over 40 years and is a holiday staff organist at Longwood Gardens in Kennett Square.

Lucente studied organ with Dr. Keith Chapman and also worked with the American/Armenian composer Richard Yardumian. Since their untimely deaths, Lucente has devoted much of his musical activities to the preservation and performance of their works.

Lucente appears frequently as a recitalist and church music clinician and is a member of the Philadelphia Organ Quartet, an ensemble that performs music arranged for four organs. He has published a number of recordings, the most recent on the large Allen Organ installed in the Cathedral of Valladolid in Spain, where he performed for the second time for an audience of nearly 2,000 in September 2009. His recording, “Christmas at Atlanta’s Fabulous Fox,” done in Surround Sound, has received wide acclaim from listeners and reviewers alike, appearing on National Public Radio every year.