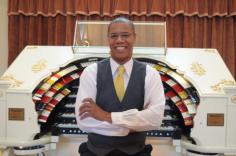 Tedde Gibson started playing the piano at age four. He is one of a few musicians able to play not only classical and theatre pipe organ, but also jazz and gospel on the Hammond and piano and integrates these styles into his playing of the Mighty Wurlitzer organ. A native of Tacoma, WA, Tedde studied pipe organ with the late Dr. Edward Hansen, president of the American Guild of Organists and organ professor at the University of Puget Sound; David Dahl, organist emeritus of Pacific Lutheran University; and Dr. J. Melvin Butler and Dr. Carol Terry of the University of Washington. Tedde has coached with international theatre organist Jonas Nordwall of Portland, OR and the late Andy Crow of Olympia, WA.

Since moving to Metropolitan DC area in 2003, he has studied classical organ with Dr. Mickey Thomas Terry, editor of a 9+ volume anthology of organ works by African American composers. Tedde also studied organ performance at The Peabody Institute of Johns Hopkins University in Baltimore with Dr. John Walker. He is organist/musician-in-residence at First Baptist Church of Highland Park; organist at Capitol Hill Seventh-Day Adventist Church; and teaches music at Highland Park Christian Academy. He is the Chairman of the Board of Directors for the American Theatre Organ Society, the first African American to chair the organization in its 65+ year history.