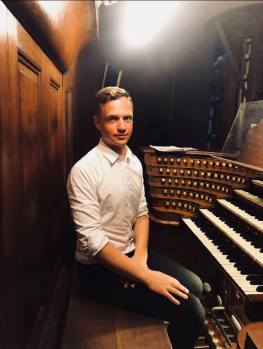 Thomas Gaynor is among the brightest stars in this generation of concert organists. He is the first-place winner of an unusual number of international competitions including St Albans 2017, Erfurt/Weimar Bach-Liszt 2015, and Sydney 2015. As a recitalist he has performed across the Americas, Europe and Australasia. Recent highlights include a recital in Notre-Dame de Paris; Lahti Organ Festival, Finland; Bogotà Bach Organ Festival, Colombia; Bergamo International Organ Festival, Italy; Edinburgh Fringe Festival, Scotland; Musashino Concert Hall, Tokyo, Japan; and Sydney Town Hall, Australia. Thomas is a recent graduate of David Higgs’s studio in the DMA program at Eastman School of Music in Rochester, NY, where he was awarded the highly coveted Artist’s Certificate – an honor the institution had not given an organist for three decades. Born in New Zealand, he began his organ studies at Wellington Cathedral, working with Michael Fulcher first as an organ scholar and later as honorary sub-organist. More recently, he was associate DOM at Christ Church, Pittsford, NY. He currently resides in Houston, TX, where he is associate DOM at Saint John Vianney, a Roman Catholic Parish of 15,000 members. His masterclass and private study with many of today’s most influential artists has given him a rare stylistic command across the whole spectrum of organ repertoire; these musicians include Cameron Carpenter, Ken Cowan, Olivier Latry, Jaques Van Oortmerssen, Jean-Baptiste Robin, Stephen Tharp and Harald Vogel.